Fall prevention with a powered exoskeleton 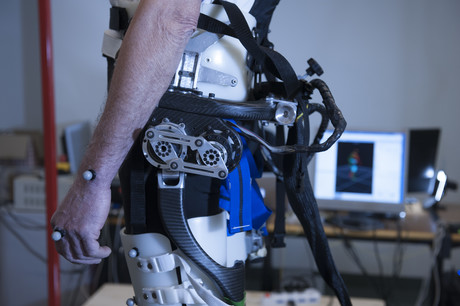 European researchers have developed a smart exoskeleton that recognises loss of balance and prevents falling in elderly patients. Their study has been published in the journal Scientific Reports.

The work was led by scientists at Scuola Sant’Anna in Italy, who built a smart, lightweight and easy-to-personalise exoskeleton prototype which counteracts the loss of balance and promotes balance recovery after an accidental slip. While other wearable machines are typically used to assist or enhance regular movement, this is said to be the first to prevent an unexpected event like falling.

“We developed a closed-loop system based on the use of a wearable device, an exoskeleton, to detect the onset of falling and to generate support to have balance recovery and to reduce the probability of falling,” said Professor Silvestro Micera.

Unlike the armoured suits one might expect from science-fiction movies, the lightweight exoskeleton is wearable from the waist down. It is equipped with motors at the hip and braces made out of carbon fibre. It was important to the researchers that the exoskeleton was non-intrusive and would not unnecessarily disturb the user, particularly when they are not falling.

The prototype requires only a few minutes to adapt to a given patient, which involves adjusting the size for a particular user and learning the user’s gait. It was tested on 69-year-old Fulvio Bertelli, who was placed on a special treadmill that can artificially make him lose his balance and slip.

Fulvio Bertelli wears the exoskeleton prototype on a treadmill that can provoke a loss of balance. Image credit: Hillary Sanctuary/EPFL.

Once the system had established Bertelli’s typical walking pattern, its algorithm is able to detect any deviations which may indicate the onset of a fall. When this happens, the motors push both of the thighs down, re-establishing Bertelli’s stability at the hip.

“This novelty of this experiment is that for the first time, a human and an exoskeleton act together in real time, and the exoskeleton gives support to mitigate a risk of fall,” said study co-author Professor Nicola Vitiello.

While the exoskeleton was designed to help the elderly by preventing fall-related injuries, it could also be used as an aid for the physically impaired, amputees and those suffering from neurological disorders. The next steps involve making the exoskeleton more discrete and portable for use outside the laboratory, and to test its usability with end users in real-life environments.

“This work paves the way for imagining a completely new generation of exoskeletons that will actually be effective outside of research laboratories thanks to their ability to augment users’ movement and make their mobility more stable and safe,” said Professor Vitiello.

“To reach these goals, exoskeletons must be endowed with features, like the one proved in this study, that really take into account what users can experience in real-life unstructured environments.”

Supporting the mental health of children and families

Free online resources such as raisingchildren.net.au are available to help families and their...